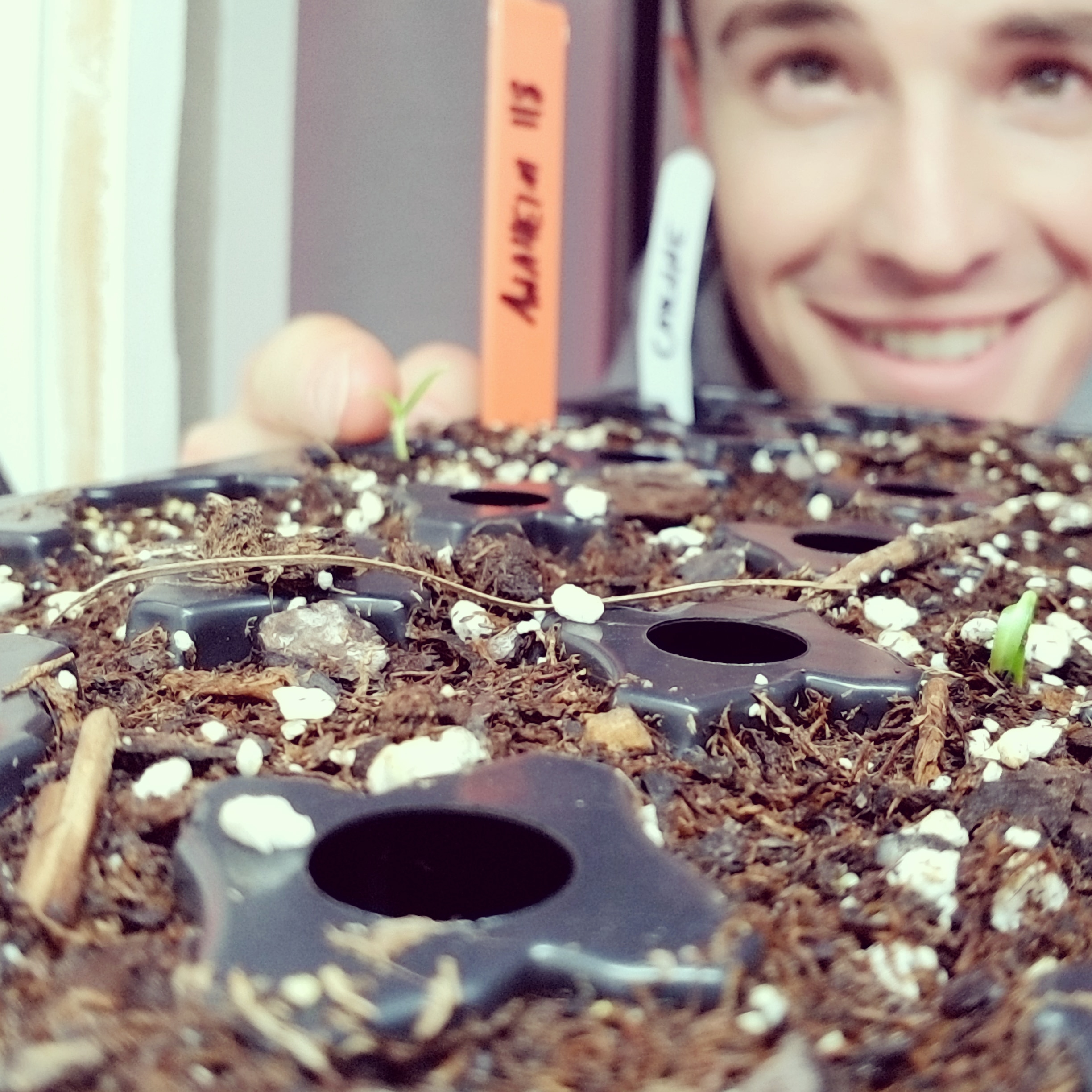 A little over one month into our seeds’ journeys & you can see that they have all taken very different paths on their journey from seed to CSA.

Evergreen Green Onions & Starhawk Lettuce were the first seeds we planted on February 12th. Both began with decent germination, but I soon saw the flaws in my methods. As the Onions & Lettuce grew, I noticed that germination was spotty, the seedlings were laying down rather than growing tall & standing and I didn’t really figure it out until I planted my 2nd round of trays – I didn’t dibble deep enough holes for the seeds & they were essentially sprouting on top of the soil. This left the roots exposed & did not provide a strong environment for survival.

Kale was another one we seeded early because it too is a cold-weather crop. We started it under fluorescent lights and it was doing okay – a little leggy because it wasn’t getting the proper amount of light distributed amongst the whole tray, but it was a whole different story once we put them under the Total Grow Broad Spectrum LED lights – mmm, real light! However, the Evergreen Onion seedlings seem to be doing amazing under the fluorescent – I’ll take it!

While everything else is thriving, I look at these empty trays and wonder, “what did I ever do to you Starhawk Lettuce, why won’t you grow!?”

Starhawk grew great for us last year, so I can’t quite figure out the problem. At first I thought it was temperature – but even tomatoes & peppers have germinated and they typically need a warmer environment (especially Ghost Peppers) so it couldn’t be that. Then I thought it was the trays – but here’s how the Starhawk Lettuce looked in the same growing trays last year:

So it couldn’t be the trays fault. I know I planted the first tray of seeds too shallow, but I corrected it for the second tray – and still having issues. At this point, the only thing I can think is that the leftover seeds from last year’s planting actually did hit their expiration date – I’m going to keep the faith on these bad boys & hope they decide to come around! Moral of the story, always analyze, refine, and attempt to correct issues early or preemptively if possible!

The seeds that I am the most surprised & excited about are the Tomatoes & Peppers. We planted 4 types of tomatoes & 6 types of peppers and saw germination of the tomatoes within 7 days & germination of the peppers within 10 days. Since I am growing some hot peppers including Habaneros & Ghost Peppers, I knew that I would have to add some heat to get them off to a strong start. In order to do that I put them under fluorescent lights which give off heat unlike LEDs which usually don’t add much heat to the system. And I also used seedling heat mats under the trays of tomatoes & peppers, which sped up germination like I couldn’t believe! I’ve always thought that it was hard to get Ghost Peppers to sprout, but I saw sprouts in 10 days! Maybe I’ll try another tray of lettuce & use the heat mats 🤔

Seedstarting is always a time of excitement with anticipation of spring, but more importantly, it is a time to analyze your challenges and develop a plan to dominate your garden execution. Here are the 4 lessons I’ve learned so far:

Seedstarting is my favorite time of the year because I get to dive into my passion of plants & gardening and because it’s conclusion is spring! I hope this helped with your seed starting questions – leave a comment with any further questions or challenges you have and I’ll be happy to answer in the comments or on my podcast on Anchor called Plant Rant!