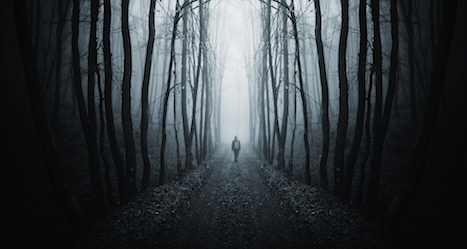 Why do these Spirits visit me?

Throughout my life I have been visited several times by what I call Spirits.

These are not ordinary people. Not that people are ordinary, but you have ordinary interactions with them – they wave & smile as we pass, or they pet the dog as I take out one earbud to signal I’m friendly enough to say “Hi”, but it also says I’m on a mission to walk my dog, not talk or get caught in the rain.

Any time – all Time – is different when you run into one of the Spirits.

Today, I took a slightly different route – nothing too crazy, but had to go on a longer walk/run to clear the mind & wear my hyper pupper out a little bit. We only added about 5-10 minutes by going up to a park a little further up the bike path we normally walk on. We get through the park, and I look both ways to cross the street. Twiggy & I began walking until I triple-checked and saw a van come out of nowhere.

I motioned the van to go ahead and go even though they were doing the same thing to me. As this van pulls up, the window rolls down and – to quote one of my favorite movies, Emperor’s New Grove – a woman who was scary beyond all reason was smiling at me. We exchanged hellos & I figured that would be all until she starts to pull the van over and says let me show you what I got in my pocket.

My stomach dropped a little bit, but I didn’t feel I had anything to worry about – maybe she had a dog treat or something, seems like we are always running into people who will do that or just chat for a bit – no problem.

It’s really strange to say, but I feel like I knew her; like she was a long-lost family member or something – your Mam-maw’s third cousin who stayed in Tennessee & you only met once but you were too little to remember. She then comes over to me & starts pulling these items out of her pocket; each one of the items is associated with a pun.

Puns – [toilet paper] to keep your crap off me, [leaf so you leaf me alone], [piece of wood] wood you be my friend, [bolt] to screw you down if you’re screwed up, [5 pennies] and some ‘cents'(sense) in case you’re missing some. She then proceeds to say guys have 3 knees – left knee, right knee, wee-knee. And then goes on to ask if I know what the thing in-between women’s boobs is called – “belly button, hope I don’t ever have to worry about that!”

Obviously I was uncomfortable, but what do you do? This lady continued to go on to tell me about some stuff that had happened to her in the past & talked about her friends’ marriages – it was all over the place! But I stood there & listened to her for a few minutes until I finally parted ways & continued the walk with Twiggy.

With the mysterious van behind me, I readjusted my headphones, waited until I heard the van start before I hit play & walked towards home shaking my head.

“Why do I always run into people that want to tell me these crazy things?”

“Why do people always want to talk to me?”

“I hope she doesn’t follow me & figure out where I live.”

Feeling a little paranoid, I turned around and the van was nowhere to be seen; I wasn’t even sure it was really there to begin with.

I told Kyla about the encounter & she wasn’t really surprised – she just said I need to “watch out for critters on the path”.

Fast forward to grocery shopping this weekend. We decide to go to a store that we NEVER go to. I’m standing there on my phone, I put it in my pocket & I am waiting for Kyla to put something in the cart when I look up & this lady who is scary beyond all reason is standing right behind Kyla. I swear she just appeared out of thin air! I didn’t see her walking – nobody saw her walking. Hell, it was like nobody saw us standing in the middle of the aisle when she starts pulling things out of her pockets:

Puns – [toilet paper] to keep your crap off me, leaf so you leaf me alone, [piece of wood] wood you be my friend, [bolt] to screw you down if you’re screwed up, [5 pennies] and some ‘cents'(sense) in case you’re missing some. She then proceeds to say guys have 3 knees – left knee, right knee, wee-knee. And then goes on to ask if we know what the thing in-between women’s boobs is called – “belly button, hope I don’t ever have to worry about that!”

At that point we just continued to walk – I knew Kyla was extremely uncomfortable. I was honestly so surprised that this spirit was a “real person” – what could I do? I sat there awestruck as she pelted us with puns; knowing full-well every line that was getting ready to come out of her mouth.

As we finally got away, she gave us a smile and a “thank you for laughing with me” and then she just stopped as we walked away. She continued to stand there watching us & then suddenly disappeared as if she was never there in the first place.

Needless to say, that encounter left us both a little disturbed; as if something was missing from us. What a strange occurrence – and this was the second time it had happened to me!

So what do you make of something like this? I’ve been stopped by a lot of people who talk about God, angels, or prophecy, but I feel as though this occurrence has significance as well – but what?

There are so many people in the world who don’t say enough, who don’t try to reach out, and yet this woman felt the need to do this to us – twice. When someone feels comfortable enough to approach you, what are you supposed to do? Just ignore them? Something told me to stop & listen. I feel as if it was a test of some sort. Like God was testing us to see how we would react; how we would treat someone who didn’t appeal to the senses – or sense in general.

Treat others how you want to be treated. Take time to get to know a stranger. And stay safe out there! 🙂

4 thoughts on “Spirits in the Park”